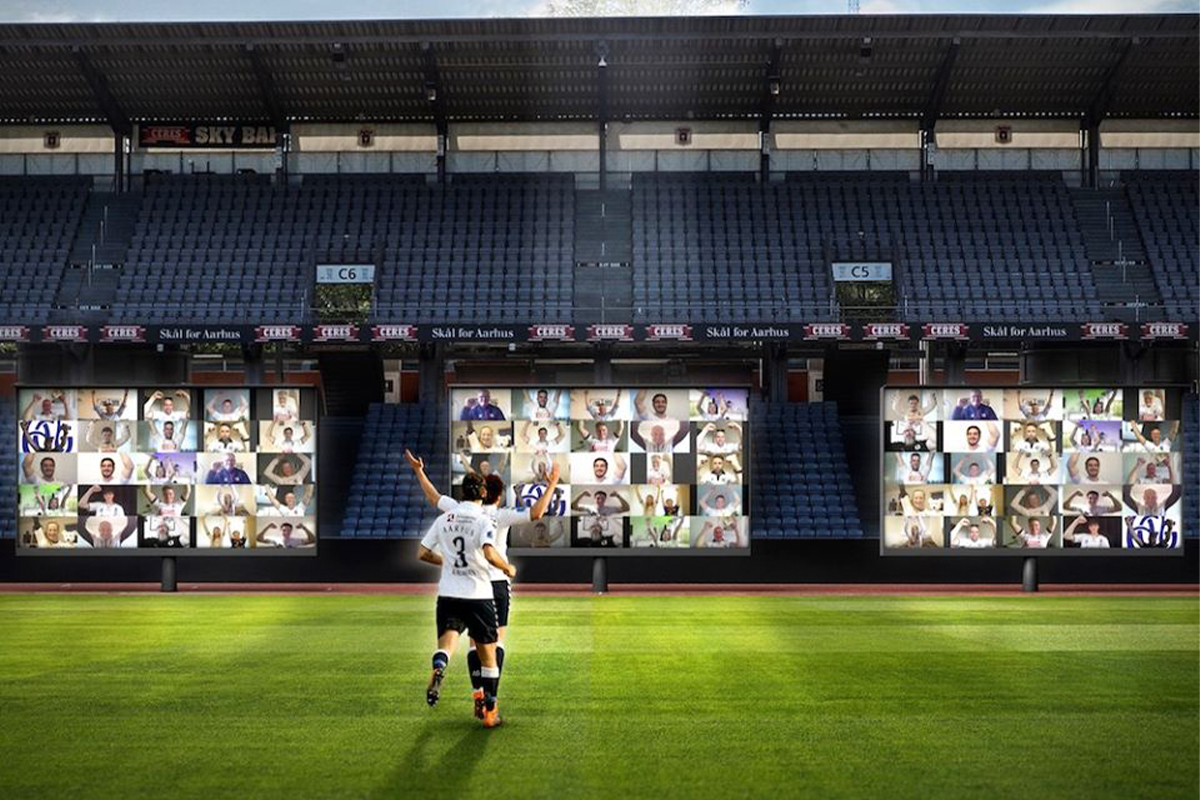 How 10,000 will watch a crowd-free football match

Denmark's Superliga restarts on Thursday, again without spectators. However, one club AGF Aarhus is using Zoom to bring 10,000 fans to one side of their stadium.

Football is starting to happen across Europe again after being shutdown by the coronavirus pandemic.

Germany’s Bundesliga has become the first major international football league to return to the pitch after suspending its season due to the coronavirus pandemic in early March when five matches were played in locked stadiums on Saturday, 15 May. Recorded cheers were played when a goal was scored to try and create atmosphere for the players.

Denmark’s Superliga restarts on Thursday, again without spectators. However, one club AGF Aarhus is using technology to bring 10,000 fans to one side of their pitch.

At their home game against Randers, AGF Aarhus is installing a giant screen along the side of the pitch, creating what they call “the world’s first virtual grandstand” so football fans can support the team for free via Zoom. There is even a section for away fans.

“It’s about creating an atmosphere around the game so that the players will see that they have the support from the city even though there are no supporters in the stands,” BBC Sport reported.

“They will hear it, they will feel it and see it on this big screen alongside the pitch,” said the project’s co-ordinator, Soren Carlsen.

The idea came from a Danish TV show where artists sing from home and viewers joined in via a video link. Three screens will be joined together to make a giant 40×2.8m screen with space for 200 fan images at a time. There will be 22 different sections for fans to choose from and TV coverage of the match will incorporate the virtual supporters.

“It will go alongside the pitch opposite the cameras, so the television station will also incorporate this in the coverage of the game,” Carlsen said.

“For instance, you often cut to the spectators when you have a goal. Here, you will cut to the homes of our supporters and then you’ll see them celebrate the goal whilst the players run alongside this screen.

“We have only had positive feedback from our fans and also from Randers who will have their own away stand in the virtual stadium.

“It’s an opportunity for them to get a sense of the community that they experience around football because it’s also about meeting people at the stadium, and here you’ll get a chance to meet some of the people that you are usually sitting with during the games.

“We will see how it turns out Thursday night, and if it’s fun and it’s working then maybe we will do it again at the next game.”

Abusive language by football fans will result in expulsion from the meeting by a moderator.

“The same rule goes for Zoom as it does at the stadium,” said Carlsen. “We will have some digital stewards and they will be monitoring it, just like the social media platforms at the club. So they can make sure that you don’t see anything that you’re not supposed to see, and you don’t hear any profanities.”

In another way to create atmosphere, AGF Aarhus fans are being invited to decorate Ceres Stadium before the match with flags, jerseys, scarves, drawings to make a mark on the match. There is also going to be a drive-in football party.

Also in Denmark, Superliga club FC Midtjylland is putting up big screens in the car park of its stadium to allow 2,000 vehicles to enter the ground and listen to commentary through their car radio using a special local frequency. Singing and car horn honking will be encouraged, with cameras capturing fans in the parking lot and the footage relayed inside the stadium to try to give the players a sense of atmosphere. Admission would be free and away fans would be invited to attend in their own area of the car park.

In Belarus, COVID-19 has been ignored and 5,000 fans saw BATE Borisov lift the Belarus Cup with a last-gasp Zakhar Volkov goal to seal a 1-0 win over Dynamo Brest in Minsk on Sunday, Reuters reported.

“Our average numbers for last season are just over 2,000 spectators and it became lower this season following news of the virus,” Aleksandr Aleinik of the Belarus Football Federation told Sky Sports.

“We didn’t lock the stadiums from public access but we tried to seat people at a certain distance from each other. We also added anti-bacterial gel and had medical staff monitoring temperatures.”

Portugal’s top flight football, Primeira Liga, will resume without spectators on 3 June while Spain’s La Liga is to resume without a crowd on 8 June. The English Premier League is scheduled to restart behind closed doors on 1 June.