Archaeologists have discovered a wide circle of deep pits surrounding an ancient settlement near the famous World Heritage site of Stonehenge in the UK.

The previously unknown structure, thought to be 4,500 years old, is 2km across and it is thought the circular feature and a post line could have guided people towards the religious sites and warned other people not to cross the boundary.

“It is amazing that our seamless survey of the Stonehenge landscape, which apply the latest technology and extends over kilometres of countryside, has revealed major new features including these huge shafts,” said Professor Wolfgang Neubauer, from the University of Vienna, Austria, in a statement on the Bradford University website.

“They are not only clearly visible in the geophysical data sets, the survey also provides the opportunity to place these features within a wider context comprising the many monuments associated with Stonehenge including the super-henge at Durrington Walls, three kilometres north-east from the iconic stone circle.”

Among the UK’s most recognisable landmarks, the standing stones at the World Heritage-listed Stonehenge in Wiltshire draw tourists from around the world as well as people searching for spiritual connections with the past. Their exact purpose remains unknown to scientists.

The new discovery is at a site located about 3.2km northeast of Stonehenge and evidence suggests the pits date back to the same period, 4,500 years ago. 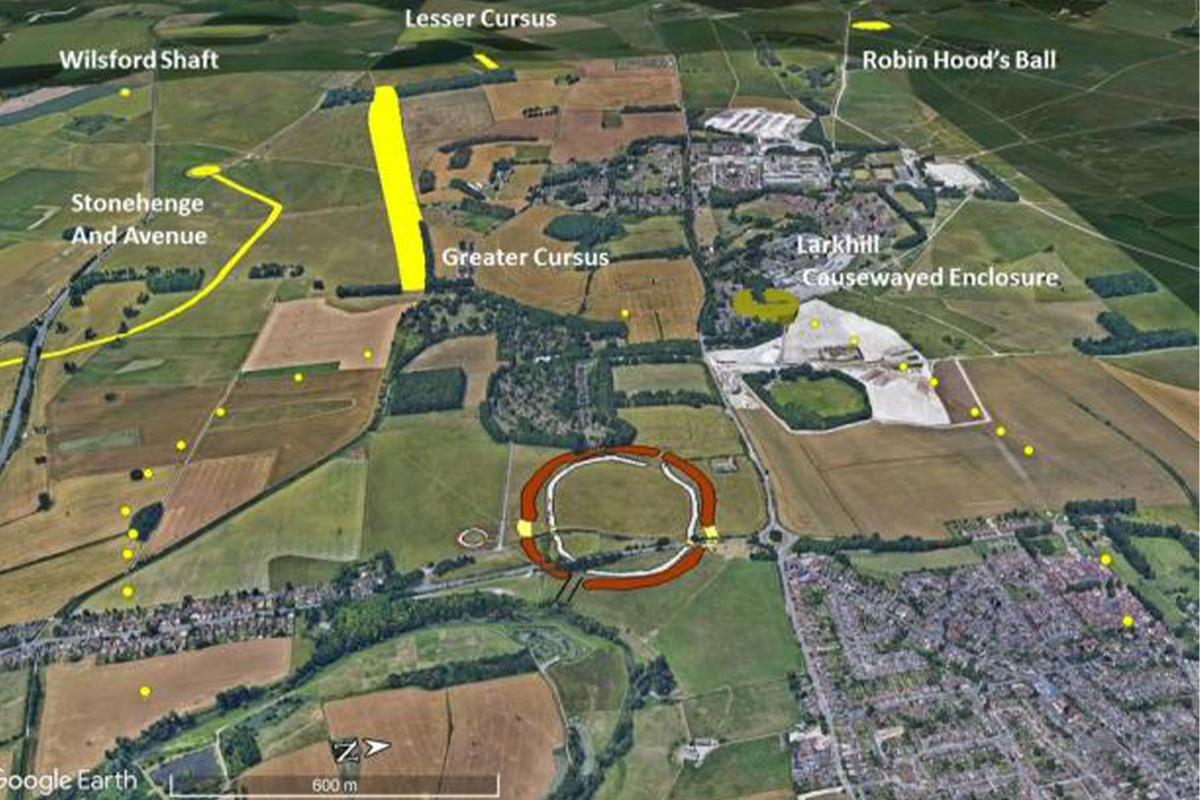 “As the place where the builders of Stonehenge lived and feasted, Durrington Walls is key to unlocking the story of the wider Stonehenge landscape,” said archaeologist Nick Snashall of the National Trust, the organisation that runs the Stonehenge site, told Reuters.

“This astonishing discovery offers us new insights into the lives and beliefs of our Neolithic ancestors,” he said.

The circle of pits is significantly larger than any comparable prehistoric monument in Britain. Researchers have found 20 shafts, but estimate there may have been more than 30 originally. Each one is about five metres deep and 10 metres across.

The discovery was made without the need for excavations, using remote sensing technology and sampling. It was announced 24 hours after the summer solstice was held as a virtual event this year due to the coronavirus pandemic.

The archaeologists said the precise and sophisticated way in which the pits were positioned suggests that the early inhabitants of Britain used a tally or counting system to track pacing across long distances.

Professor Vince Gaffney, 50th Anniversary Chair of the School of Archaeological and Forensic Sciences in the Faculty of Life Sciences at the University of Bradford, said it was extraordinary that such a major find had been made so close to Stonehenge.

“The area around Stonehenge is amongst the most studied archaeological landscapes on earth and it is remarkable that the application of new technology can still lead to the discovery of such a massive prehistoric structure, which currently is significantly larger than any comparative prehistoric monument that we know of in Britain, at least,” he said.

“When these pits were first noted it was thought they might be natural features – solution hollows in the chalk. Only when the larger picture emerged, through the geophysical surveys undertaken as part of the Stonehenge Hidden Landscape Project, could we join the dots and see there was a pattern on a massive scale.”

Research on the pits at Durrington was undertaken by a consortium of archaeologists as part of the Stonehenge Hidden Landscapes Project. Work at Durrington was facilitated by the National Trust and supported by the University of Bradford Research Development Fund.