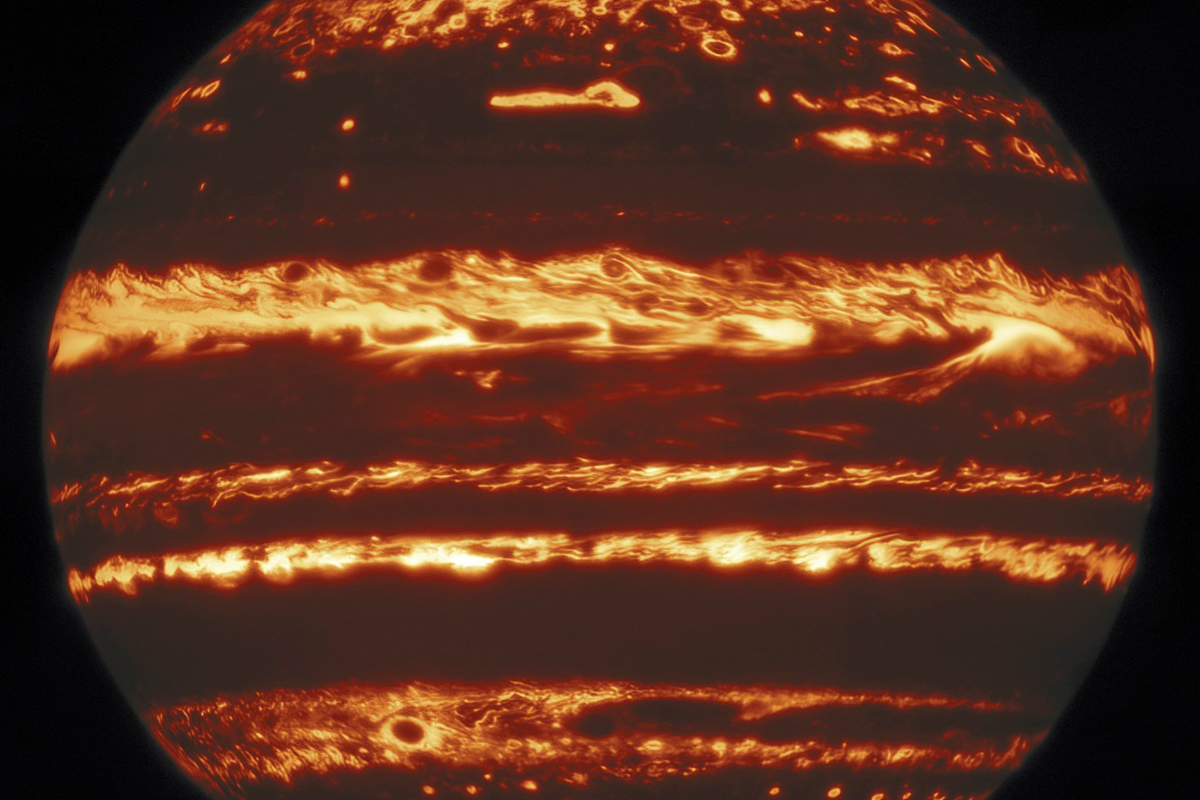 This is the planet Jupiter like you've never seen before

Researchers using a technique known as “lucky imaging” with the Gemini North telescope on Hawaii’s Maunakea volcano have collected some of the highest resolution images of the planet Jupiter ever obtained from the ground.

The images are part of a multi-year joint observing program with the Hubble Space Telescope in support of NASA’s Juno mission.

“The Gemini images, when combined with the Hubble and Juno observations, reveal that lightning strikes, and some of the largest storm systems that create them, are formed in and around large convective cells over deep clouds of water ice and liquid. The new observations also confirm that dark spots in the famous Great Red Spot are actually gaps in the cloud cover and not due to cloud colour variations, the Gemini Observatory said in a statement.

“The Gemini data were critical because they allowed us to probe deeply into Jupiter’s clouds on a regular schedule,” said Michael Wong at the University of California, Berkeley, who led the research team. “We used a very powerful technique called lucky imaging.”

With lucky imaging, a large number of very short exposure images are obtained and only the sharpest images, when the Earth’s atmosphere is briefly stable, are used. The result in this case is some of the sharpest infrared images of Jupiter ever obtained from the ground.

“These images rival the view from space,” said Wong. 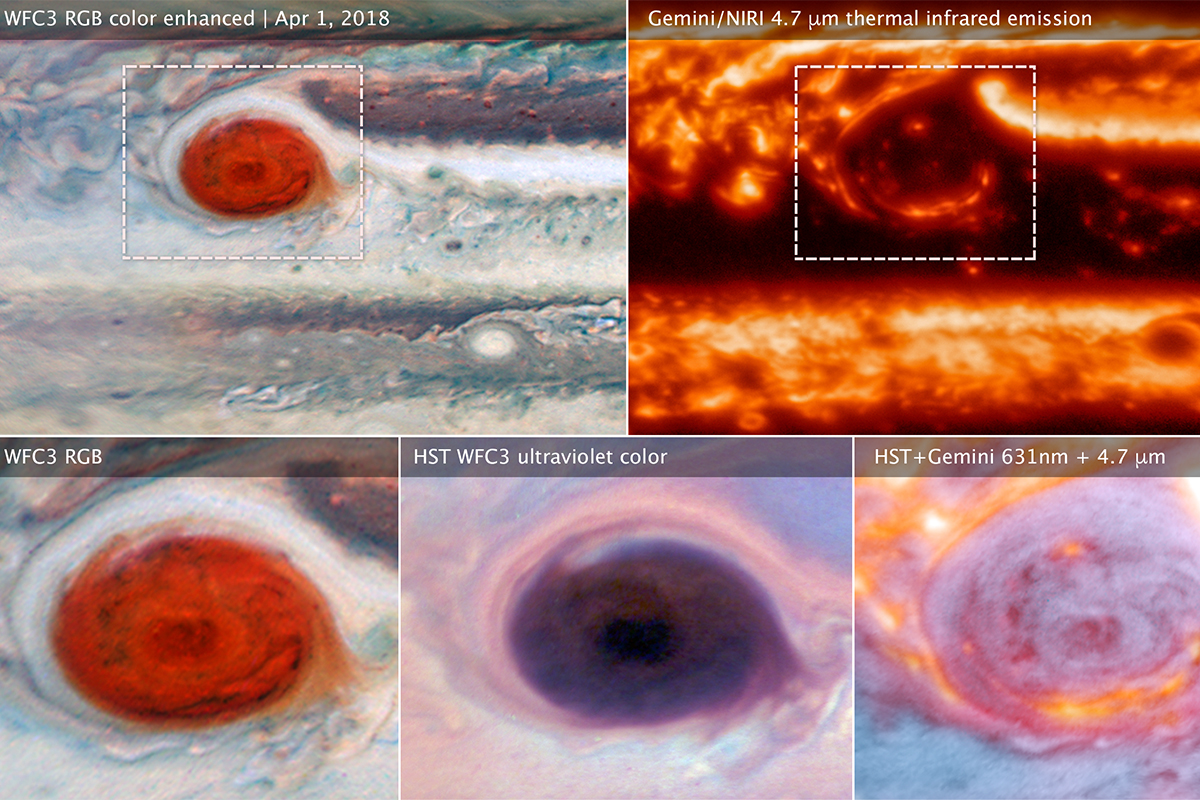 The images of Jupiter’s Great Red Spot made using data collected by the Hubble Space Telescope and the Gemini Observatory.

Jupiter, which is 500 million miles away from Earth, has gigantic and constant storms, with thunderheads reaching 40 miles from base to top — five times taller than typical thunderheads on Earth — and powerful lightning flashes up to three times more energetic than Earth’s largest “superbolts.”

Like lightning on Earth, Jupiter’s lightning bolts act like radio transmitters, sending out radio waves as well as visible light when they flash across the sky, NASA said in a statement.

Images from Juno, together with previous missions to Jupiter, revealed dark features within the Great Red Spot that appeared, disappeare and changed shape over time. It was not clear from individual images whether these are caused by some mysterious dark-coloured material within the high cloud layer, or if they are instead holes in the high clouds — windows into a deeper, darker layer below.

With the ability to compare visible-light images from Hubble with thermal infrared images from Gemini captured within hours of each other, it was possible to find the answer. Regions that are dark in visible light are very bright in infrared, indicating that they are, in fact, holes in the cloud layer. In cloud-free regions, heat from Jupiter’s interior that is emitted in the form of infrared light — otherwise blocked by high-level clouds — is free to escape into space and therefore appears bright in Gemini images.

“It’s kind of like a jack-o-lantern,” said Wong. “You see bright infrared light coming from cloud-free areas, but where there are clouds, it’s really dark in the infrared.”

The regular imaging of Jupiter by the Hubble Space Telescope and Gemini Observatory in support of the Juno mission is proving valuable in studies of many other weather phenomena as well, including changes in wind patterns, characteristics of atmospheric waves and the circulation of various gases in the atmosphere.

Hubble and Gemini can monitor the planet as a whole, providing real-time base maps in multiple wavelengths for reference for Juno’s measurements in the same way that Earth-observing weather satellites provide context for NOAA’s high-flying Hurricane Hunters.

“Because we now routinely have these high-resolution views from a couple of different observatories and wavelengths, we are learning so much more about Jupiter’s weather,” said Amy Simon of NASA’s Goddard Space Flight Centre in Greenbelt, Maryland. “This is our equivalent of a weather satellite. We can finally start looking at weather cycles.” 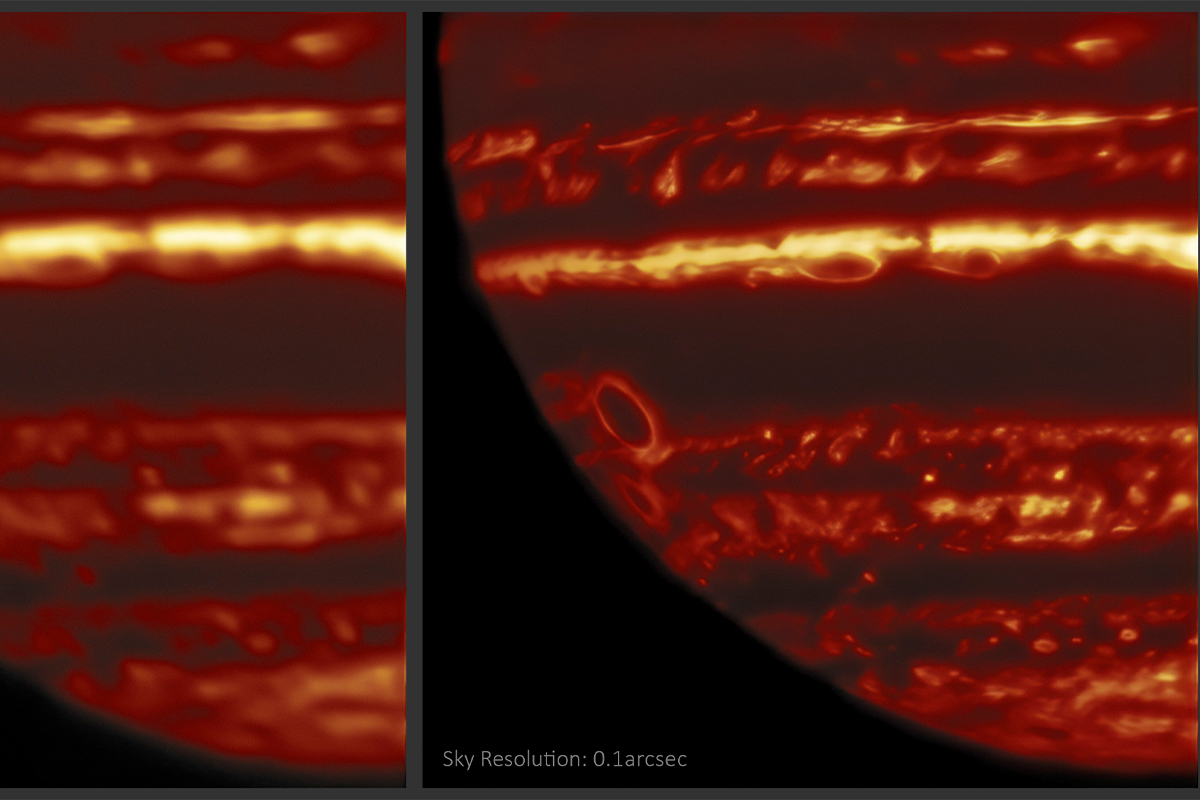 Image on left shows wind distorting the image, whereas the larger image is crystal cleaer.

Because the Hubble and Gemini observations are so important for interpreting Juno data, Wong and his colleagues Simon and Imke de Pater, also of UC Berkeley, are making all of the processed data easily accessible to other researchers through the Mikulski Archives for Space Telescopes (MAST) at the Space Telescope Science Institute in Baltimore, Maryland.

“What’s important is that we’ve managed to collect this huge data set that supports the Juno mission. There are so many applications of the data set that we may not even anticipate. So, we’re going to enable other people to do science without that barrier of having to figure out on their own how to process the data,” Wong said.

The results were published in The Astrophysical Journal Supplement Series this month.