NASA and SpaceX are in final preparations for the first flight with astronauts to the International Space Station.

NASA astronauts Bob Behnken and Doug Hurley have been completing a series of mission simulations from launch to landing at the International Space Station despite the coronavirus pandemic.

The mission, known as Demo-2, is a close mirror of the company’s uncrewed flight test to the International Space Station in March last year. This time astronauts Behnken and Hurley will be aboard the SpaceX Crew Dragon spacecraft launching atop a Falcon 9 booster rocket as part of NASA’s Commercial Crew Program (CCP).

When Crew Dragon launches atop a Falcon 9 rocket with Behnken and Hurley strapped inside as early as mid-to-late May, it will herald a new era for human spaceflight, enabling greater access to low-Earth orbit and destinations beyond with the help of commercial partners. Behnken and Hurley will join another NASA astronaut, Chris Cassidy, who launches to the International Space Station on 9 April.

“It will be the first time to launch astronauts from US soil since the end of the Space Shuttle Program in 2011, and it will be the first time since STS-1 that we will launch astronauts in a new spacecraft,” said Hess. “This new spacecraft, Crew Dragon, was designed and built by SpaceX, not by NASA and traditional contractor partnerships — another first. Bob Behnken and Doug Hurley will definitely be earning their spacecraft test pilot wings with this mission. Also, the Space Station Program is really looking forward to another way to rotate crews to station to perform science and experiments to benefit all.” 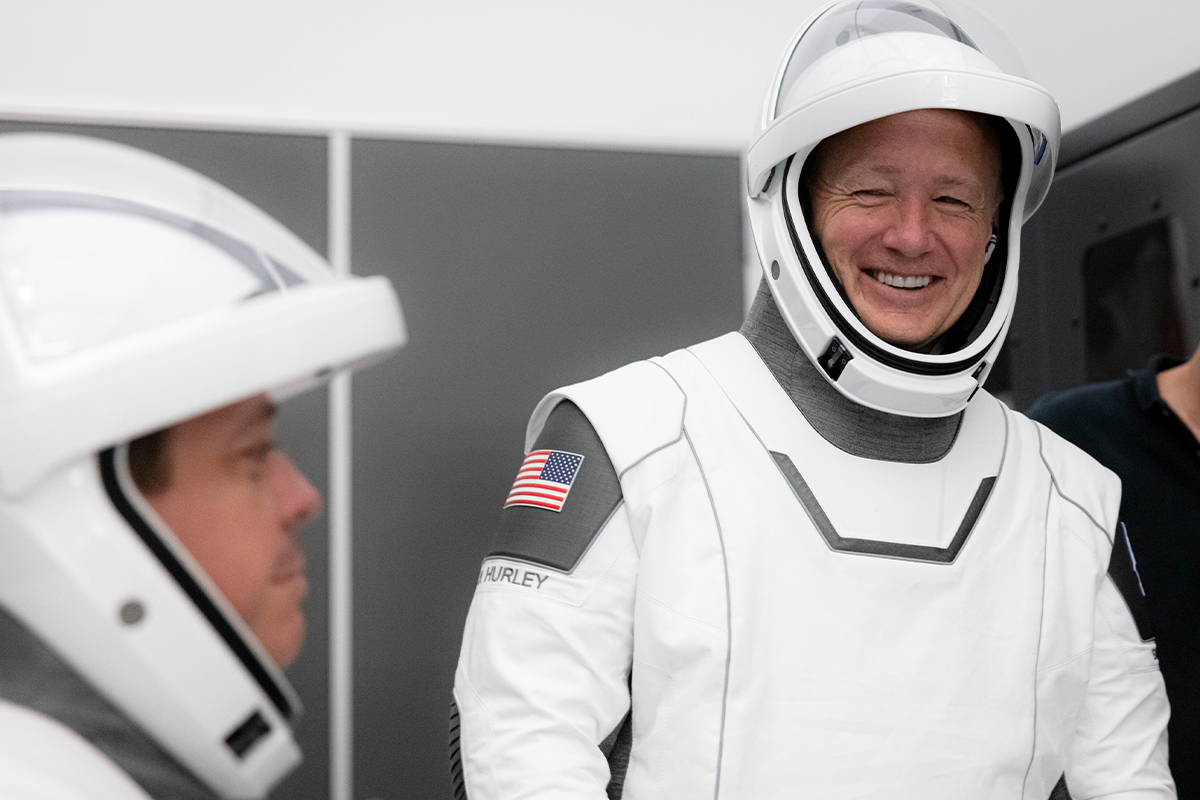 When Crew Dragon launches atop a Falcon 9 rocket with Behnken and Hurley strapped inside as early as mid-to-late May, it will herald a new era for human spaceflight, enabling greater access to low-Earth orbit and destinations beyond with the help of commercial partners.

NASA selected SpaceX and Boeing in 2014 to each build a spacecraft capable of ferrying crew to and from the International Space Station. SpaceX’s Crew Dragon was the first to complete an uncrewed flight test, where the vehicle proved it could dock and undock itself from the space station. That test was a huge success and was followed on by a picture-perfect test of the Crew Dragon’s onboard escape system earlier this year.

Following the inflight abort test, all SpaceX needed to do was complete a series of tests of its Mark 3 parachute before NASA gave the all-clear to launch. But the company ran into a snag when it experienced two incidents back-to-back – the loss of a mock Dragon used for parachute testing and an unrelated in-flight rocket engine failure.

But the manned flight to the International Space Station appear unphased, and the duo are working full steam ahead towards the May launch deadline. Key flight control teams stationed at their launch posts at NASA’s Kennedy Space Center, Johnson Space Center and SpaceX HQ have simulated the different phases of launch. In contrast, the astronauts have practiced launch procedures from their Crew Dragon simulator.

“The simulations were a great opportunity to practice procedures and to coordinate decision-making for the mission management team, especially with respect to weather,” Hess said.

“Simulation supervisors do a great job at picking cases that really make the team think and discuss.”

During the most recent simulations, teams ran through an entire mission from prelaunch countdown to ascent. They also tested the docking with the station while previous tests ran through timelines from hatch closure to undocking from the space station. There were also drills for free-flight in preparation for re-entry and splashdown.

The countdown is on as the Crew Dragon capsule undergoes its final testing and preparations at SpaceX facilities at Cape Canaveral Air Force Station in Florida. Once crew training and flight readiness reviews are complete, the spacecraft will be attached to its launcher: a new Falcon 9 booster.