With the alarming growth in cases of COVID-19, the bid to find the origin of the coronavirus has gone quiet.

US President Donald Trump launched another scathing attack on China in his speech on the nation’s 244th Independence Day.

“China’s secrecy, deceptions, and cover-ups allowed it to spread all over the world and China must be held fully accountable,” Trump said.

However, Dr Tom Jefferson, senior associate tutor at the Centre for Evidence-Based Medicine (CEBM), at Oxford University, UK, tells the Telegraph that there is growing evidence that the virus was elsewhere before it emerged in Asia.

Spanish virologists announced last week they had found traces of the disease in samples of waste water collected in March last year, nine months before the coronavirus disease was publicly seen in China.

Italian scientists also found evidence of coronavirus in sewage samples in Milan and Turin, in mid-December, many weeks before the first case was detected, while experts have found traces in Brazil in November last year.

Dr Jefferson writes that many viruses lie dormant across the world and emerge when conditions are favourable. They can vanish as quickly as they arrive under such a scenario.

“Where did Sars 1 go? It’s just disappeared,” he said “So we have to think about these things. We need to start researching the ecology of the virus, understanding how it originates and mutates.

“I think the virus was already here, here meaning everywhere. We may be seeing a dormant virus that has been activated by environmental conditions.

“There was a case in the Falkland Islands in early February. Now where did that come from? There was a cruise ship that went from South Georgia to Buenos Aires, and the passengers were screened and then on day eight, when they started sailing towards the Weddell Sea, they got the first case. Was it in prepared food that was defrosted and activated?

“Strange things like this happened with Spanish Flu. In 1918 around 30% of the population of Western Samoa died of Spanish Flu, and they hadn’t had any communication with the outside world.

“The explanation for this could only be that these agents don’t come or go anywhere. They are always here and something ignites them, maybe human density or environmental conditions, and this is what we should be looking for.”

Dr Jefferson is of the belief that the virus may be spread through the sewage system or shared toilet facilities, not just through droplets expelled by talking, coughing and sneezing.

Dr Jefferson and Professor Carl Henegehan, Director of the Centre for Evidence-Based Medicine, called for an in-depth investigation similar to that carried out by John Snow in 1854, which showed cholera was spreading in London from an infected well in Soho.

Wondering why so many COVID-19 outbreaks happen at food factories and meatpacking plants? Dr Jefferson and Professor Henegehan believe it may be because of shared toilet facilities coupled with cool conditions that allow the coronavirus to live.

“We’re doing a living review, extracting environmental conditions, the ecology of these viruses which has been grossly understudied,” said Dr Jefferson.

“There is quite a lot of evidence that huge amounts of the virus is in sewage all over the place, and an increasing amount of evidence suggests there is faecal transmission. There is a high concentration where sewage is four degrees, which is the ideal temperature for it to be stabled and presumably activated. And meatpacking plants are often at four degrees.

“These meat packing clusters and isolated outbreaks don’t fit with respiratory theory, they fit with people who haven’t washed their hands properly.

“These outbreaks need to be investigated properly with people on the ground one by one. You need to do what John Snow did. You question people, and you start constructing hypotheses that fit the facts, not the other way around.”

More than 533,000 people have died from COVID-19 and nearly 6.2 million have recovered from the virus. 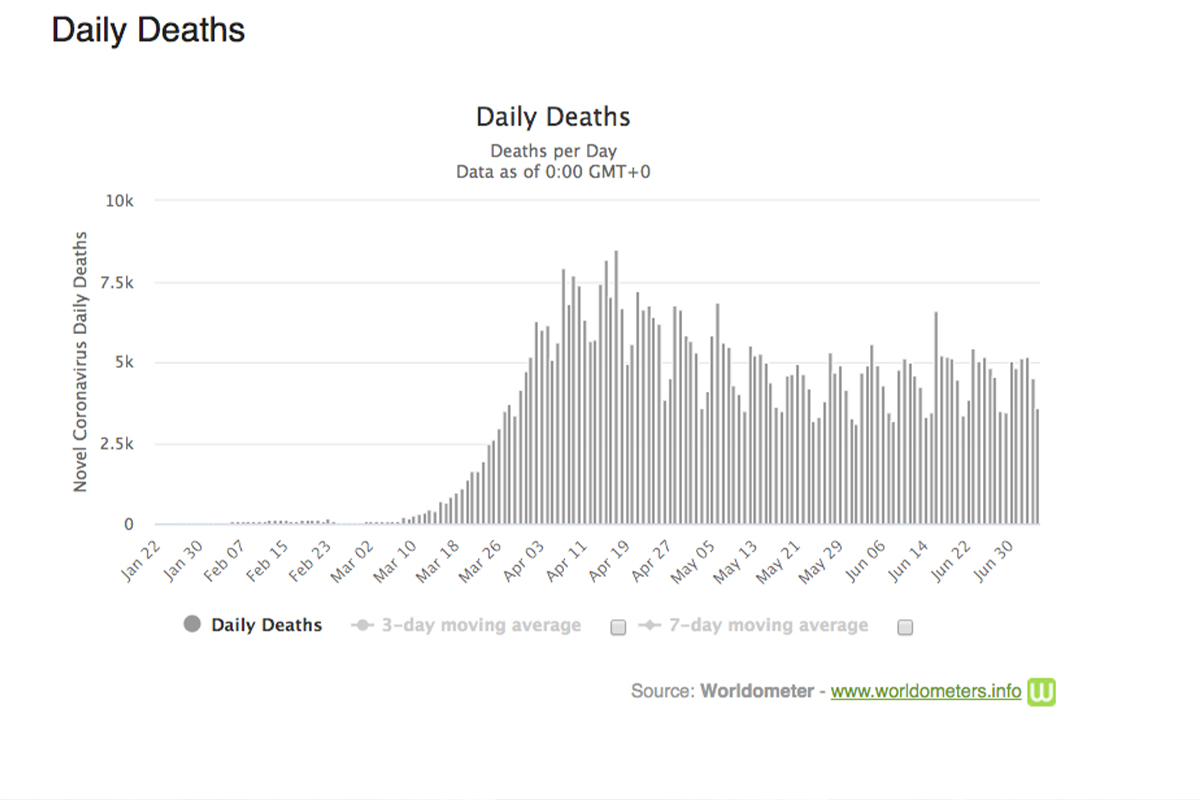