For the first time US President Donald Trump has worn a face mask in public.

As the US faces soaring confirmed cases of COVID-19, the face mask is an appropriate message by the US President, if markedly belated.

Donald Trump for months had refused to wear a face mask in public but he allowed himself to be photographed wearing a face mask as he visited Walter Reed National Military Medical Centre in Bethesda, Maryland. It was only on July 2, that for the first time he declared to Fox Business: “I am all for masks”.

When asked why he was wearing a face mask, Donald Trump, according to the White House, replied:

“Well, I’ll probably have a mask, if you must know. I mean, I’ll probably have a mask. I think when you’re in a hospital, especially in that particular setting, where you’re talking to a lot of soldiers and people that, in some cases, just got off the operating tables, I think it’s a great thing to wear a mask. I’ve never been against masks, but I do believe they have a time and a place.”

With new infections spiking from Florida to Oregon, Donald Trump’s belated move to wear a face mask could make it easier for White House staff, as well as Republican governors and members of Congress, to appeal to Americans to wear facial coverings, the Los Angeles Times reported.

“Wearing of face masks in public corresponds to the most effective means to prevent interhuman transmission, and this inexpensive practice, in conjunction with simultaneous social distancing, quarantine, and contact tracing, represents the most likely fighting opportunity to stop the COVID-19 pandemic, prior to the development of a vaccine” they wrote.

The US Centres for Diseases Control and Prevention state that “cloth face coverings are an additional step to help slow the spread of COVID-19 when combined with every day preventive actions and social distancing in public settings”.

Trump’s stance had led to a divergence of opinion over the wearing of face masks. Social media posts have featured clashes over face masks being worn with fracas in supermarkets, coffee shops and taco diners.

More than half a million people have died from the coronavirus disease in six and a half months, and World Health Organization Director-General Tedros Adhanom Ghebreyesus said there would be no return to the “old normal” for the foreseeable future, especially if preventive measures were neglected.

“Let me be blunt, too many countries are headed in the wrong direction; the virus remains public enemy number one,” he told a virtual briefing from the WHO’s headquarters in Geneva, Switzerland.

The disease appears to be accelerating fastest in North America and South America, which account for more than half the world’s cases and half the deaths. For the past two days Brazil has daily had the most number of deaths – 659 people died on Sunday and 770 people died on Monday. 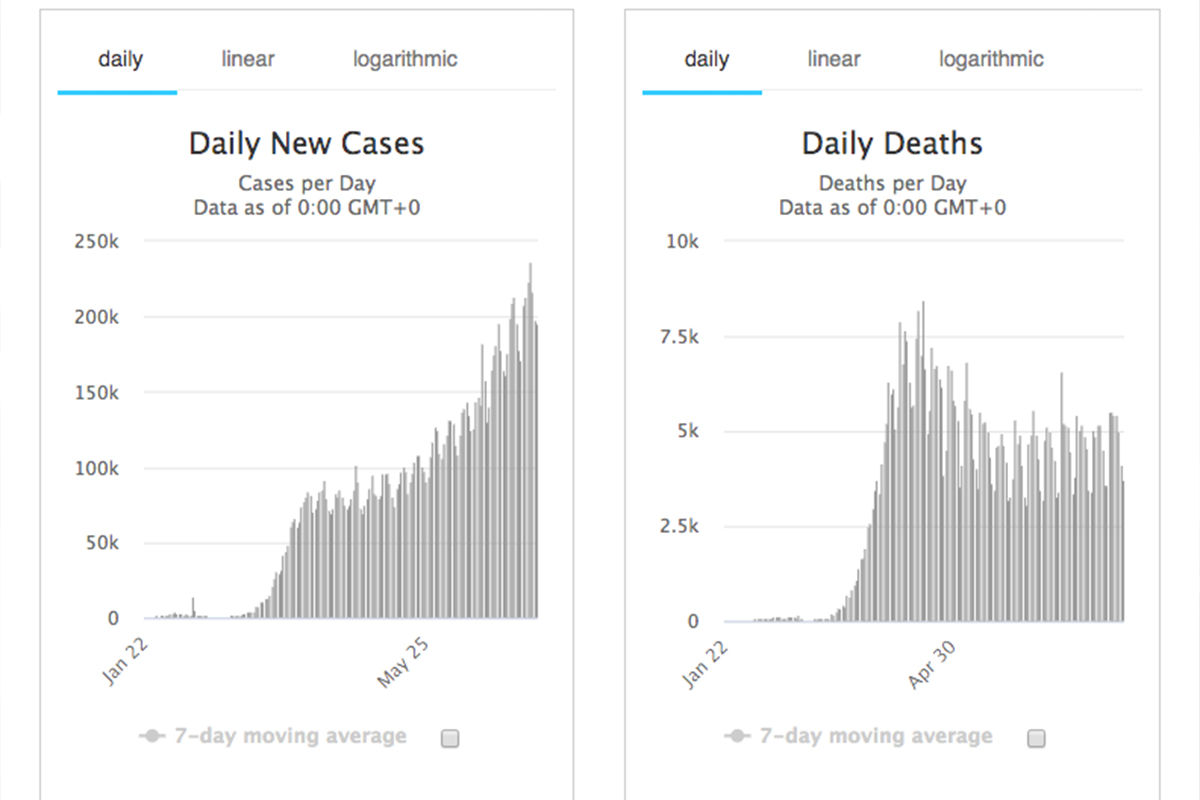