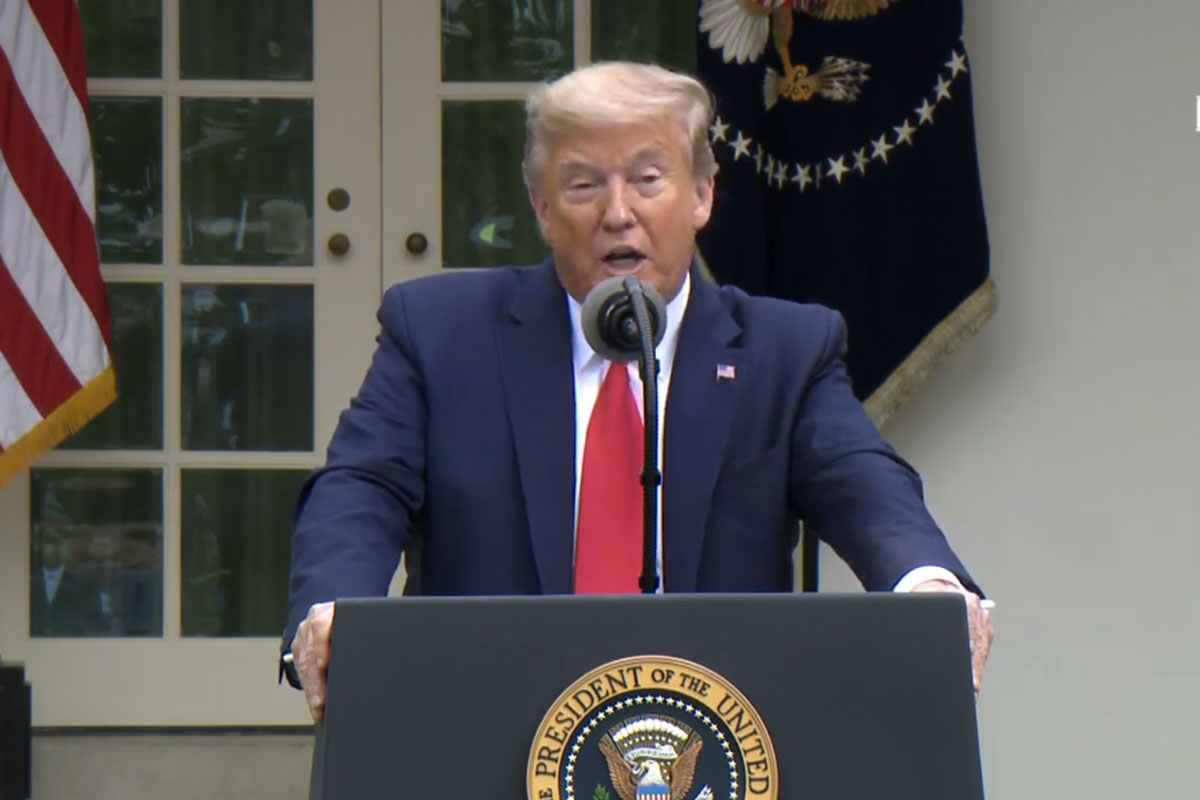 US President Donald Trump said he had been taking the anti-malaria and anti-lupus drug hydroxychloroquine for a week-and-a-half and he also said that he is taking a daily zinc supplement and had a single dose of azithromycin, an antibiotic used for the treatment of a number of bacterial infections

US President Donald Trump has revealed he is taking hydroxychloroquine to stop the infection from coronavirus.

Donald Trump, who was speaking at the White House, said he was taking hydroxychloroquine, which is used to treat malaria and lupus.

The 73-year-old Trump was hosting a meeting devoted to the struggling restaurant industry on Monday (US time), when he caught reporters off guard by revealing he was taking the drug, BBC News reported.

“I happen to be taking it.”

Trump has previously praised hydroxychloroquine as a treatment for COVID-19, but the US Food and Drug Administration issued a warning about the drug, saying it became aware of reports of “serious heart rhythm problems” in patients with coronavirus who were treated with the malaria drug, often in combination with antibiotic azithromycin.

Hydroxychloroquine, which is available as a generic drug and is also produced under the brand name Plaquenil by French drugmaker Sanofi, can have serious side effects, including muscle weakness and heart arrhythmia. A small study in Brazil was halted for safety reasons after coronavirus patients taking chloroquine, which hydroxychloroquine is derived from, developed arrhythmia, including some who died. A study published in the JAMA Network last week found hydroxychloroquine appeared to not help COVID-19 patients and, instead, put them at increased risk of a heart attack.

Asked what was his evidence of the benefits of hydroxychloroquine, Trump said: “Here’s my evidence, I get a lot of positive calls about it.”

Trump also was asked if the drug had been recommended by the White House physician.

Trump said hydroxychloroquine “seems to have an impact”.

“I’ve heard a lot of good stories and if it’s not good, I’ll tell you right I’m not going to get hurt by it.”

Trump also revealed that he is taking a daily zinc supplement and had a single dose of azithromycin, an antibiotic used for the treatment of a number of bacterial infections.

Three members of the White House coronavirus taskforce Dr Anthony Fauci of the National Institute of Allergy and Infectious Diseases; Dr Stephen Hahn, commissioner of the US Food and Drug Administration; and Dr Robert Redfield, director of the Centers for Disease Control and Prevention have entered two weeks of isolation, after having contact with someone who later tested positive to COVID-19.

Senator Lamar Alexander, a Republican from Tennessee who chairs the health committee, is isolating himself after a member of staff tested positive. A senior admiral on Trump’s top military advisory committee, chief of naval operations Michael Gilday, is also isolating himself following contact with an infected relative. Chief of the National Guard Bureau Air Force General Joseph Lengyel tested positive for COVID-19 on Saturday, before he was to meet Trump, but a subsequent test later that day came back negative. Lengyel tested negative again on Monday.

Trump’s COVID-19 drug suspended by WHO