Working on the notion that "nobody goes to sleep honest and wakes up a cheat", Gideon Haigh undertook his own 'cultural review' to pinpoint what went wrong in the leadup to Australian cricket's high profile fall from grace.

The result is his latest cricket book, Crossing The Line, a sage survey of a once all-conquering national team at an awkward stage of its history.

At the elite level at least, Haigh finds a game enamoured of acronyms and besotted by management speak to the point it is drowning in layers of consultants and high-performance managers who have replaced the old hierarchical system that served Australian cricket well for decades.

Justin Langer is on a mission to restore the reputation of the Australian #cricket team after the ball-tampering disgrace in South Africa.@CAComms #coach #leadership #business #sport #culture #respecthttps://t.co/RZowzmzFPI

Was ‘sandpapergate’ just the symptom of a cultural malaise in Australian cricket?

Haigh talked to 50 cricketers and officials for his review and says the events of Cape Town, which saw Steve Smith, Dave Warner and Cameron Bancroft all suspended for their role in ball-tampering, gave a rallying point to widespread dissatisfaction with the direction of the game.

All participants were interviewed on a not-for-attribution basis and some anecdotes had to be left out as they would have identified the interview subject. “Suffice to say that a full-blown account would have been even less flattering,” Haigh tells The CEO Magazine.

Haigh says his critique is, to a degree, informed by his experience at the social level of the game, where he has played for a quarter of a century for local club the Yarras. He describes his time there as providing solace “reminding me every day how cricket brings out the best in people.”

“A lot of the time, however, the high-level squabbling goes over our heads,” he adds.

“We’re more concerned with how our D Sunday team is going than the Australian Test team. That’s interesting to me.

“For all Cricket Australia’s talk of ‘fans first’, the levels of the game are quite discrete. Perhaps that’s because their obsession is not with communities but with markets.” 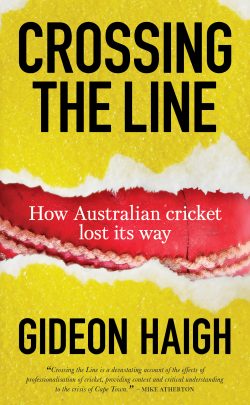 Many who talked to Haigh lamented the move away from the old system which provided a clear aspirational ladder for cricketers to move from lower grades to first grade and then into state second XI cricket on their way to state and ultimately national level.

It was a system where players mixed with older and more experienced cricketers and progressed only where their performance demanded it. The newer system has scrapped this approach in favour of cordoning off players identified as national prospects or Players of National Interest (PONIs).

Haigh finds the new dog and PONI show wanting. “The structure, once so simple, has grown unwieldy,” he says. “A lot of it adds nothing.”

Now to google the 30 words used by Gideon Haigh that are outside my vocabulary. Having @gradecricketer podcast back is bliss 🏏👏

‘Headbutting the line’ of fair play

Another dispiriting trend has been an embrace of a ‘win at all costs’ mentality. As Nathan Lyon tells it, the players aren’t willing to cross a line of unacceptable behaviour. They will “headbutt” it, though.

Elsewhere in the book, pugnacious wicketkeeper Brad Haddin reveals why the New Zealanders apparently deserved a verbal barrage from the Australian team: they were guilty of being too nice. “I’m not playing cricket like this,” he fumes.

Ironically, the ‘win at all costs’ approach has coincided with a period where the Australian team has struggled to win anything of note away from home. Similarly, the new talent identification structure has only produced “mediocre” dividends, Haigh says.

Crossing the Line ends in more sanguine fashion with Haigh noting the game has more diverse participants than ever before.

Indeed, watching the admirable Australian’s women’s team, ranked number one in the world in both ODI and T20 formats and adept at both competing hard and playing fair, it’s hard not to see something of a blueprint for better days ahead.