Shoppers stripped shelves in supermarkets bare of toilet paper, tissue paper, hand sanitisers, pasta, rice and flour for weeks on end and restrictions are now in place to control supplies

With the COVID-19 lockdown producing forecasts of the worst economic downturn since the Great Depression from the IMF and the various reports of countries going into recession, this is hard to believe. It’s all to do with the toilet paper roll hoarding that took place all over Australia when there was first talk of a lockdown.

The mad rush to stockpile products like toilet paper rolls, pasta, rice, flour and alcohol came as Australia’s Prime Minister involved emergency powers in a bid to stop the spread of coronavirus on 16 March after flagging such action since January.

The Great Toilet Paper Shortage in Australia became international news, with even fights breaking out over toilet rolls when they became scarce.

The Australian Bureau of Statistics reported on Wednesday (local time) that retail turnover, seasonally adjusted, rose by 8.2% in March, which is the highest seasonally adjusted increase ever, beating the 8.1% recorded in June of 2000 when people shopped like mad before the Goods and Services Tax was implemented and prices increased.

These figures are only preliminary, and could be revised in the final monthly estimate, to be published on 6 May. However, the Australian Bureau of Statistics said the preliminary figures indicated “unprecedented demand” in the food retail industry, with strong sales across supermarkets, liquor and specialised food.

“Additional analysis indicates monthly turnover doubled for products such as toilet and tissue paper, and rice and pasta. In addition to food retailing, sales were also strong in retail industries selling items related to home offices for example,” the Australian Bureau of Statistics said in a statement.

“In recent weeks, sales growth across the Group’s retail businesses has been strong, reflecting unprecedented demand for a range of products as customers have consumed more at home and stocked their pantries. This has been particularly pronounced in Australian and New Zealand food, leading to challenges across the supply chain in keeping up with demand, which has unfortunately led to shortages on store shelves,” said Woolworths Group CEO, Brad Banducci, . 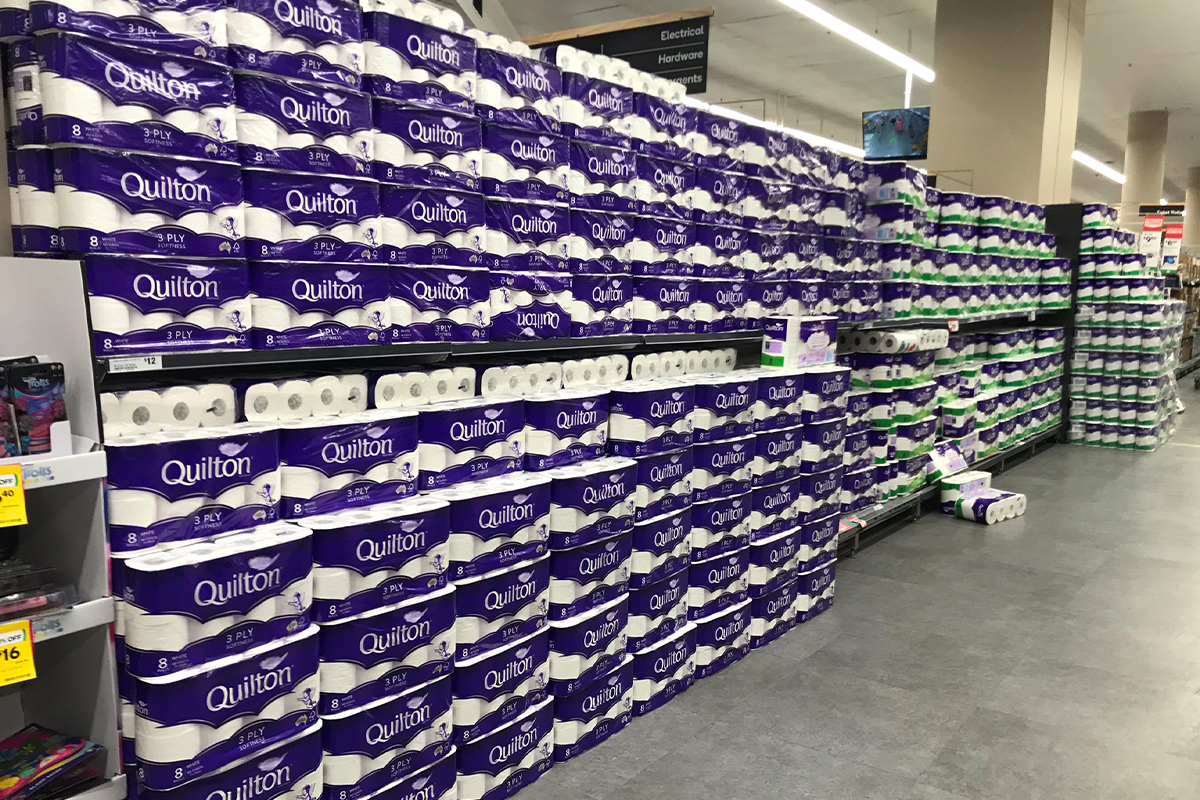 Even today shoppers are still restricted in the amount of certain items they can buy but most products are now back on the shelves.

Australia has recorded 74 deaths from COVID-19 to date, with 6,650 confirmed cases. They include 2,974 in New South Wales, 1,336 in Victoria, 1,024 in Queensland, 437 in South Australia, 546 in Western Australia, 201 in Tasmania, 104 in the Australian Capital Territory and 28 in the Northern Territory. The borders between states are closed and there are few domestic flights.

The country is in lockdown, with almost all businesses closed and people ordered to stay at home wherever possible.