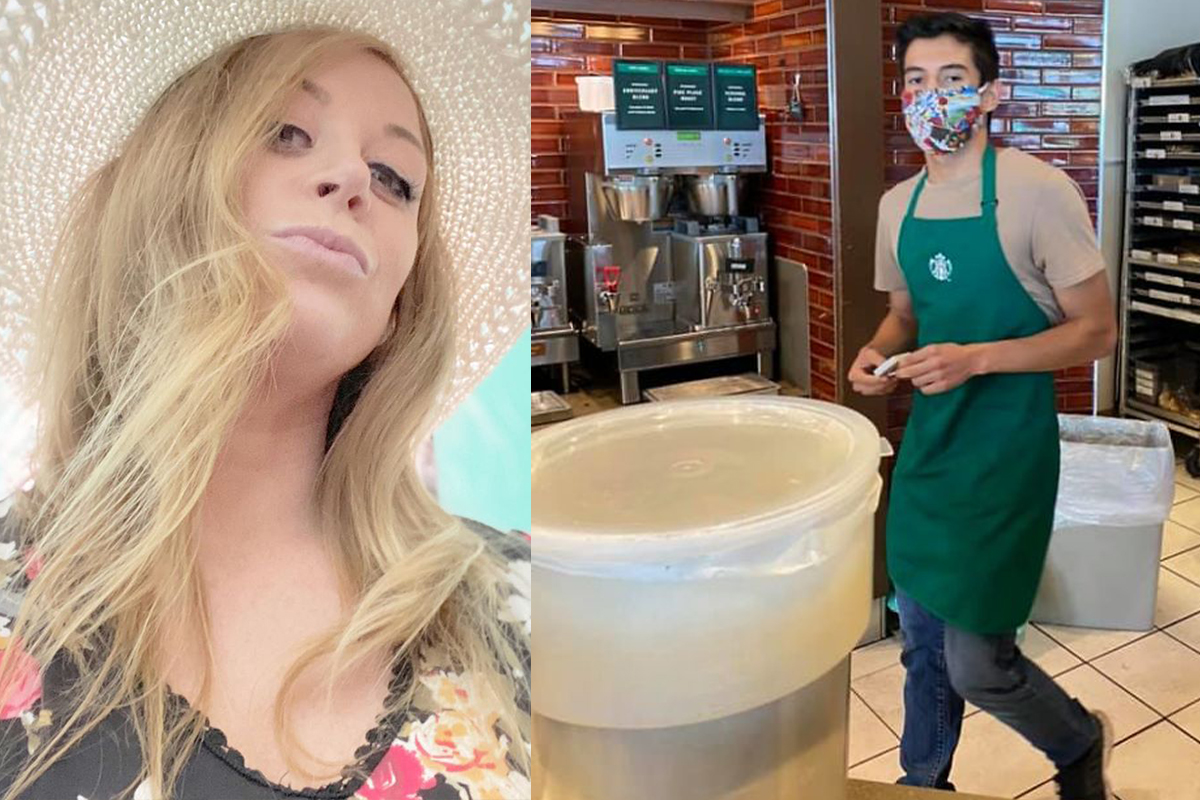 A Starbucks barista Lenin Gutierrez who was ‘shamed’ on social media after asking a woman if she had a face mask has had the last laugh.

Lenin Gutierrez, 24, was working at Starbucks in San Diego when yoga instructor Amber Lynn Gilles walked in without a face mask and attempted to place an order.

Gutierrez asked her if she had a face mask and was about to show her the company and California’s public health mandate of face masks, when Giles launched a tirade of abuse, or as Gutierrez said, “cursing up a storm”.

Then Gilles, a self-described activist, took a photograph of Lenin Gutierrez on her smartphone and, lo and behold, posted it on her Facebook page.

“Meet Lenen from Starbucks who refused to serve me cause I’m not wearing a mask. Next time I will wait for cops and bring a medical exemption,” Gilles wrote in her post, which was accompanied by the photo of Gutierrez wearing a face mask.

Giles clearly wanted to shame Lenin Gutierrez, who was only doing his job. Public health officials now require Californians to wear masks or cloth face coverings in most settings outside the home. And workers in certain industries are required wear a mask or respirator while on the job.

The coronavirus has been spreading through Califronia rapidly. Over the past week, the state has averaged 5,120 new cases and 58 people dying daily. The US Centers for Disease Control and Prevention recommends that everyone “should wear a cloth face cover when they have to go out in public” to reduce transmission and slow the spread of the coronavirus, which is highly contagious.

Social media has many virtues and when people saw Amber Lynn Gilles’ post they were rightly upset about her behaviour and wanted to support Lenin Gutierrez. Many said they would like to tip Lenin Gutierrez at Starbucks.

Tom Cowan, a 26-year-old, who has never met Lenin Gutierrez was upset that the barista was “being bullied for doing the right thing” and set up a GoFundMe, named “Tips for Lenin Standing Up To A San Diego Karen,” to give everyone who wanted to tip Gutierrez a chance to do so virtually (Karen incidentally is a name used to reference white women acting entitled in public).

“People aren’t asking you to do a lot, they’re asking you to wear a mask for your safety and the safety of others,” Cowan told CNN. “Starbucks has also set up other ways to get coffee if you aren’t comfortable wearing a mask.”

Lenin Gutierrez uploaded a Facebook video to thank everyone for “all the love and support”.

“It’s been so helpful and so shocking to see something get so big that only happened within a few minutes,” the barista said.

Lenin Gutierrez said Gilles left for a little while but came back and asked him his name and took a picture, threatening to “call corporate”.

Lenin Gutierrez said he would use the money to help him achieve his dream of being a dancer and he would also contribute to organisations in the San Diego community.

Gilles when spoken to by NBC San Diego was unrepentant and said she deserved some of the money and was going to sue Tom Cowan.

“I never threatened him.” Hear from woman who was denied service at a Clairemont Starbucks for refusing to wear a mask. She publically shamed the barista. A Go Fund Me Page on his behalf is now over $22,000. She says she’s getting death threats. #nbc7 & https://t.co/ylvk5rP6Vf pic.twitter.com/gCREw0LR5V