Lamborghini makes amazing supercars for the roads. Now the Italian automaker has announced a luxury speedboat named the Tecnomar for Lamborghini 63 – and it’s stomach-churning quick.

Lamborghini, in collaboration with The Italian Sea Group and yacht builder Tecnomar, have designed the limited edition speedboat based off its the equally limited edition hyper sports car known as the Lamborghini Sián FKP 37. 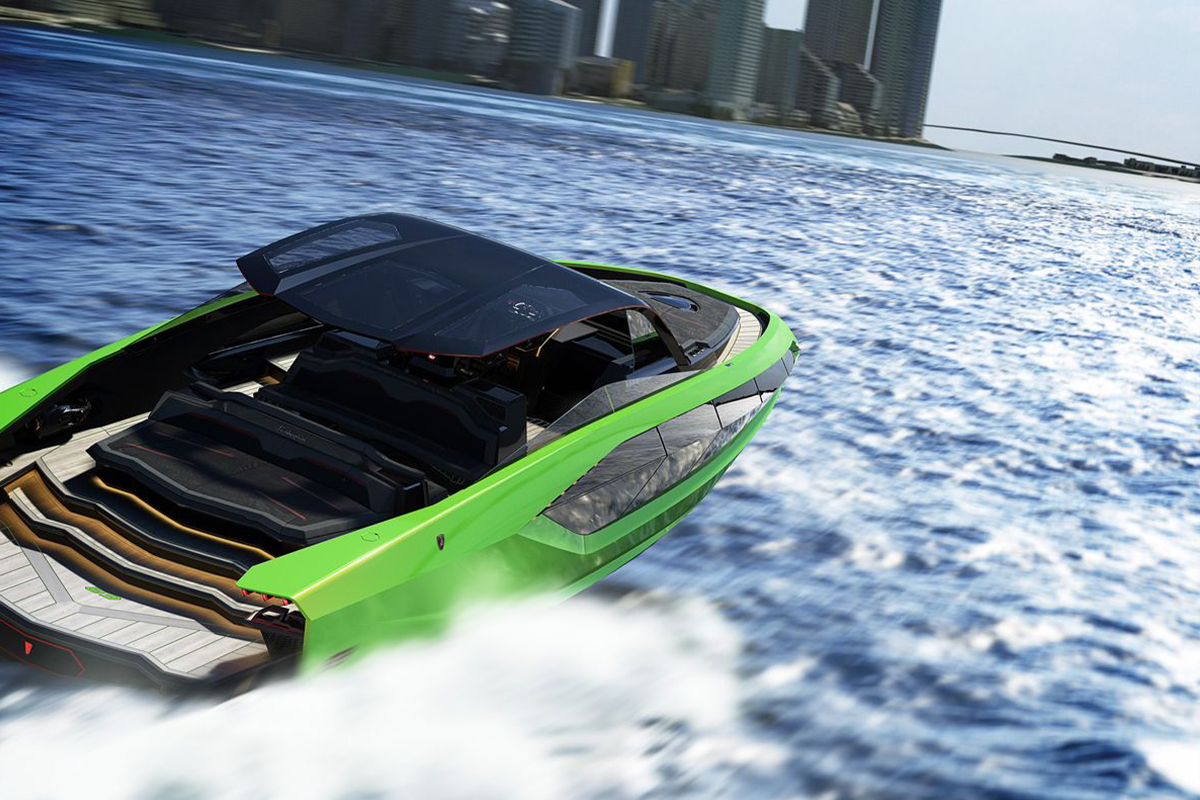 The Sant’Agata Bolognese, Italy-based super car brand and the boatbuilders will create 63 of the hyper sports car-lookalike boats, which are also meant to commemorate Lamborghini’s founding in 1963. The €3 million (USA$3.4 million) yacht is not strictly the first boat on which Lamborghini has collaborated on. Lamborghini provided engines for other speed boats in the sixties but this is the first boat the company has designed. 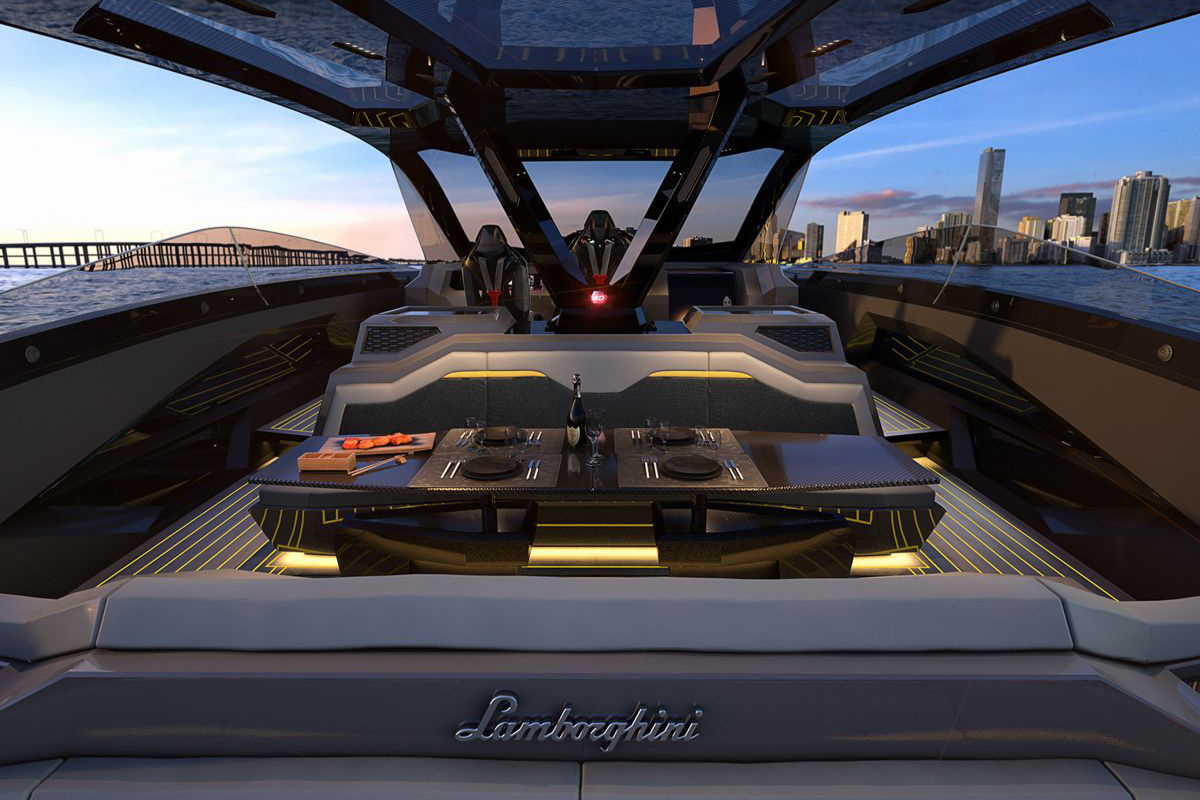 Tecnomar for Lamborghini 63 is not just an exercise in luxurious style and design. Automobili Lamborghini said in a statement it “represents the vanguard in luxury speed boats. Inspired by Lamborghini super sports cars’ performance, the most significant innovative features at the heart of the concept are speed and the dynamism of lightweight engineering”.

“With two MAN V12-2000 hp engines, the motor yacht reaches 60 knots and will be the fastest of the Tecnomar fleet, satisfying the demands of the collector as well as those loving life at sea. The carbon fibre material, typical of Lamborghini super sports cars, puts this motor yacht firmly in the ultra-lightweight boat classification, with its 63 feet length weighing in at just 24 tons,” Automobili Lamborghini said in the statement.

“The exterior design is characterized by a super sportive silhouette, with a cutting-edge but thoroughly nautical appearance. The hull and the superstructure are created from a high-performance shell, developed by naval engineers specializing in hydrodynamic sciences. They interpret the design lines, created by Marcello Gandini in the Miura and the Countach of the 60s and 70s, in a contemporary way. The hard top is inspired by Lamborghini roadsters: providing sun and wind protection while guaranteeing an outstanding aerodynamic performance. The bow lights are an homage to the Lamborghini concept car Terzo Millennio and to the Sián FKP 37, both distinctive for their Y-shaped front lights.” 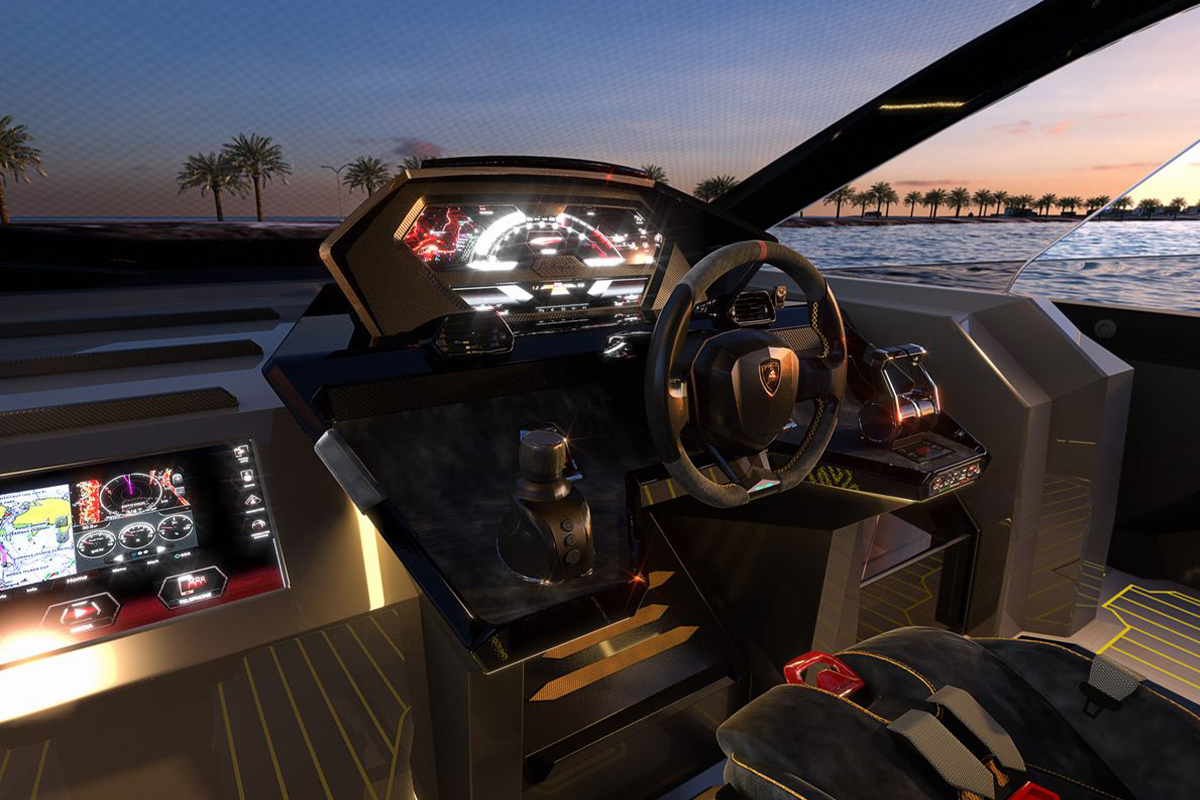 In true luxury yacht fashion, the deck’s colour and materials are fully customisable, with clients able to choose from an extensive list of colours and liveries. There are plenty of neat touches, including hexagon shapes and carbon fibre panels scattered throughout. There are two start stop buttons, one for each engine, exactly the same as found on the Lamborghini Sián FKP 37.

The speed boat’s instrument panel interprets the car cockpit in a nautical style, completely integrating all navigation and control systems. As in Lamborghini super sports cars, details are finished in carbon fibre, with Lamborghini sports seats and matching steering wheel on the helm. 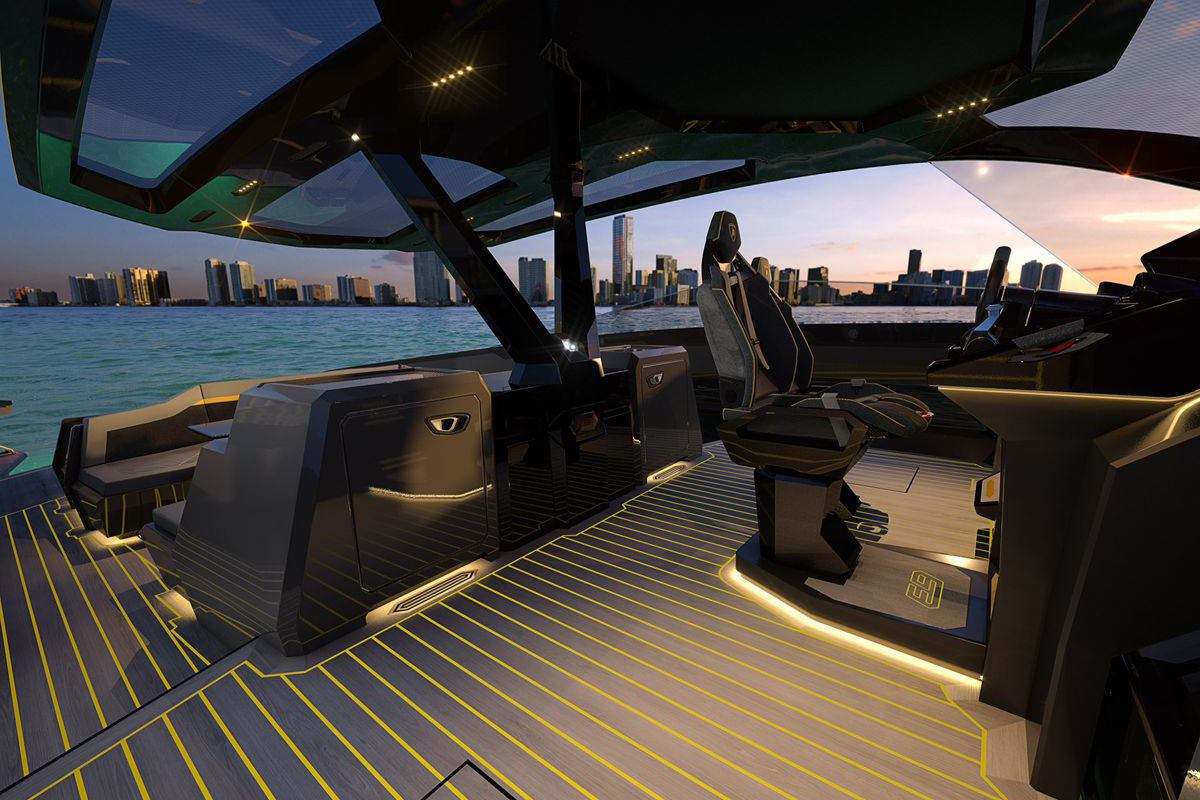 ”This yacht represents the significance of creating a valuable partnership, at its best: our co-operation allows the essence of both organisations’ style and expertise to be transferred to different worlds, sharing in their diversity to interpret and add value to the final product in a new environment. If I had to imagine a Lamborghini on water, this would be my vision. I’m delighted to celebrate this successful collaboration,” said Stefano Domenicali, Chairman and CEO of Automobili Lamborghini.

“We announced this partnership in May, and today we present Tecnomar for Lamborghini 63, a motor yacht which will become as futuristic an icon as the car she is inspired by,” said Giovanni Costantino, CEO of The Italian Sea Group. “Selected owners around the world will own not only the fastest Tecnomar motor yacht in the fleet, but a Tecnomar for Lamborghini 63 masterpiece. I’m proud that we have chosen to create this innovative and challenging project with Automobili Lamborghini, which links technology, supreme design, quality and performance.”

Automobili Lamborghini is not the first car maker to get into the water. Mercedes-AMG has made high-speed boats in partnership with Cigarette Racing. In 2016, Aston Martin made the 37-foot AM37 powerboat; in 2017, Lexus designed a one-off, 42-foot Lexus Sport Yacht concept; and in the same year, Bugatti debuted its 66-foot, 1,000-horsepower Niniette. Last year, Fisker got in on the act when it announced a 164-foot superyacht with Benetti for US$37 million, ForbesQuint reported.

Tecnomar for Lamborghini 63 super yachts will go on sale in 2021.